The global economic recovery is weakening as government policies have failed to restore confidence, the International Monetary Fund has said.

It added that the risk of further deterioration in the economic outlook was "considerable" and had increased.

One of the biggest downgrades was to the UK economy, which the IMF expects to shrink by 0.4% this year.

This compares with its forecast of 0.2% growth in July. Next year, the UK economy should grow by 1.1%, the IMF said, down from its previous forecast of 1.4%.

In response to the downgrade, the UK Treasury highlighted the fact that the IMF had "repeated its advice that the first line of defence against [slowing growth] should be to allow the automatic stabilisers to operate, monetary policy easing and measures to ease the flow of credit - all of which the UK is doing".

The fund's forecast for global growth this year has been lowered to 3.3% from 3.5%.

Olivier Blanchard, the IMF's chief economist, said the slowdown was being led by problems within the developed countries: "Low growth in advanced economies is affecting emerging and developing economies through exports." 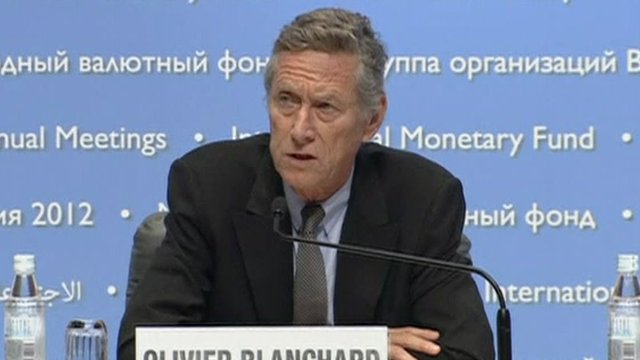 Olivier Blanchard: "The financial system is still not functioning efficiently"

"What is happening is a rebalancing of our economy. We have created a million net new jobs [and] we are now a net exporter of cars," he told the BBC.

"But it is a slow process."

The shadow treasury minister, Chris Leslie, said the IMF's downward revision of the UK's economic outlook showed the government's economic policies were not working: "Twelve months ago, the IMF were saying, if the economic situation worsened, we'd need to have an alternative plan, we'd need to have serious action.

The markdown for the UK's prospects comes despite recent data that has pointed to a return to growth.

However, Martin Beck, from Capital Economics, said that was mainly due to a recovery from the effects of the Queen's Jubilee celebrations on the economy.

"Recent data had actually been been quite promising - industrial output and exports increased quite substantially - but that largely reflected the fact that June was a bad month because of the Jubilee disruption and the extra bank holiday we had then," he told the BBC.

"We've got a positive growth rate for the third quarter but we expect another contraction in the fourth quarter."

The IMF's report said that overall, "[economic] output is expected to remain sluggish in advanced economies but still relatively solid in many emerging markets and developing economies".

It said much would depend on action taken by policymakers in Europe and the US.

It highlighted the importance of the European Stability Mechanism (ESM), the eurozone's new permanent fund to bail out struggling economies and banks launched earlier on Monday. The fund added that greater integration of taxation and spending policies across the eurozone was needed, as well as measures to begin the process of banking union.

"The ESM must intervene in banking systems and provide support to sovereigns, while national leaders must work toward true economic and monetary union," the IMF said.

The ESM, hailed on Monday by Jean-Claude Juncker, Prime Minister of Luxembourg and chair of the fund, as "an historic milestone in shaping the future of monetary union", will have a lending capacity of 500bn euros (£400bn; $650bn) by 2014.

The ESM will be able to lend directly to governments, but it will also be able to buy their sovereign debts, which could help reduce the borrowing costs of highly-indebted countries such as Italy and Spain.

In the US, growth depended on a deal to avoid the so-called fiscal cliff, when automatic spending cuts and tax increases will kick in at the beginning of next year, the IMF said.

If policymakers fail to agree to delay these measures and increase America's debt ceiling, "the US economy could fall back into recession", with serious knock-on effects for the rest of the world, it added.

Assuming agreement is reached, the US economy will grow by 2.1% next year, the IMF said, down from its forecast of 2.3% made in July. This year, the economy will actually grow by more than previously forecast - by 2.2% rather than 2%.

Measures to relieve "chronic household debt burdens" did not address the scale of the problem, it said, while "efforts to strengthen the regulatory framework for financial institutions and markets have been patchy".

While there had been some success in rebuilding capital bases of banks, not enough had been done to address "excessive risk taking" in financial markets.

The fund also called for further action to address long-term unemployment. "In advanced economies, growth is now too low to make a substantial dent in unemployment," it said.

Figures released on Friday showed that the unemployment rate in the US fell to 7.8%, the lowest rate since January 2009 but still much higher than for most of the past 20 years.

Last week, figures showed unemployment in the eurozone stable at a record high of 11.4%. Spain and Greece, where about one in four of the workforce are out of a job, have the highest rate.

In Asia, "the near and medium-term outlooks are less buoyant compared with the region's growth performance in recent years", the fund said. It highlighted weaker exports as a result of lower demand for goods in the West.

Weaker demand for exports would also impact on Latin American economies, as would lower domestic demand due to government policy tightening, the fund said. As a result, Brazil's economy would grow by 1.5% this year, down from the previous forecast of 2.5%.